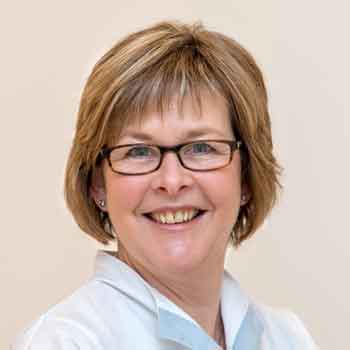 Mary graduated in 1983 from the British School of Osteopathy London, now known as the University College of Osteopathy after four years training. Mary worked in the south for one year after graduating before setting up the practice in Wetherby in 1984. Mary enjoys equine activities, sailing and skiing.
Mary initially studied physiotherapy (but at that time the training was quite different to now) and wanted to be more proactively involved in the treatment of the cause of problems, rather than just the symptoms. She first came across Osteopathy through a friend, who asked her if she would like to see her being treated for a bad back. It was at this point, Mary knew exactly what she wanted to do.

Mary has undertaken further academic study and has a teaching qualification, PGCertHE, is a Fellow of the Higher Education Academy(FHEA), and has been a Senior Lecturer in Osteopathy on the Masters of Osteopathy Course at Leeds Beckett University for ten years. She was involved in the development of the Masters course and it’s delivery from 2007 to 2017.

Mary has enjoyed extending her scope of practice with postgraduate study in the Cranial field of Osteopathy and has a particular interest in providing management and treatment of expectant mothers and patients suffering from headaches and migraine.

In 2012 Mary was appointed as an assessor of the GOSC, assessing and providing feedback on registered osteopath’s portfolios as part of a national pilot scheme for professional revalidation.

Mary is also a member and contributor to NCOR – National Council for Osteopathic Research.

This website uses cookies to improve your experience while you navigate through the website. Out of these cookies, the cookies that are categorized as necessary are stored on your browser as they are essential for the working of basic functionalities of the website. We also use third-party cookies that help us analyze and understand how you use this website. These cookies will be stored in your browser only with your consent. You also have the option to opt-out of these cookies. But opting out of some of these cookies may have an effect on your browsing experience.
Necessary Always Enabled
Necessary cookies are absolutely essential for the website to function properly. This category only includes cookies that ensures basic functionalities and security features of the website. These cookies do not store any personal information.
Non-necessary
Any cookies that may not be particularly necessary for the website to function and is used specifically to collect user personal data via analytics, ads, other embedded contents are termed as non-necessary cookies. It is mandatory to procure user consent prior to running these cookies on your website.
SAVE & ACCEPT